This year, Rudy’s Dirty Vegan Diner – based in Camden, London – made headlines, when they opened the first-ever vegan butchers in the UK, selling their popular vegan meat-alternatives.

The first batch of Festive Feast Boxes went on sale on the 22nd November, and Rudy’s sold over 100 boxes in the first ten minutes, selling out in record time, proving the massive demand for such a product, along with the growing popularity of veganism in the UK.

Following the first on-sale date, co-founder Ruth (Rudy) said: “I was watching the live feed when we went back online and it was pretty exciting (a little nerve wracking too, I’ll admit)!”

“We sold out of Christmas Meat Feasts in less than an hour and over 100 orders were placed in less than 10 minutes.” 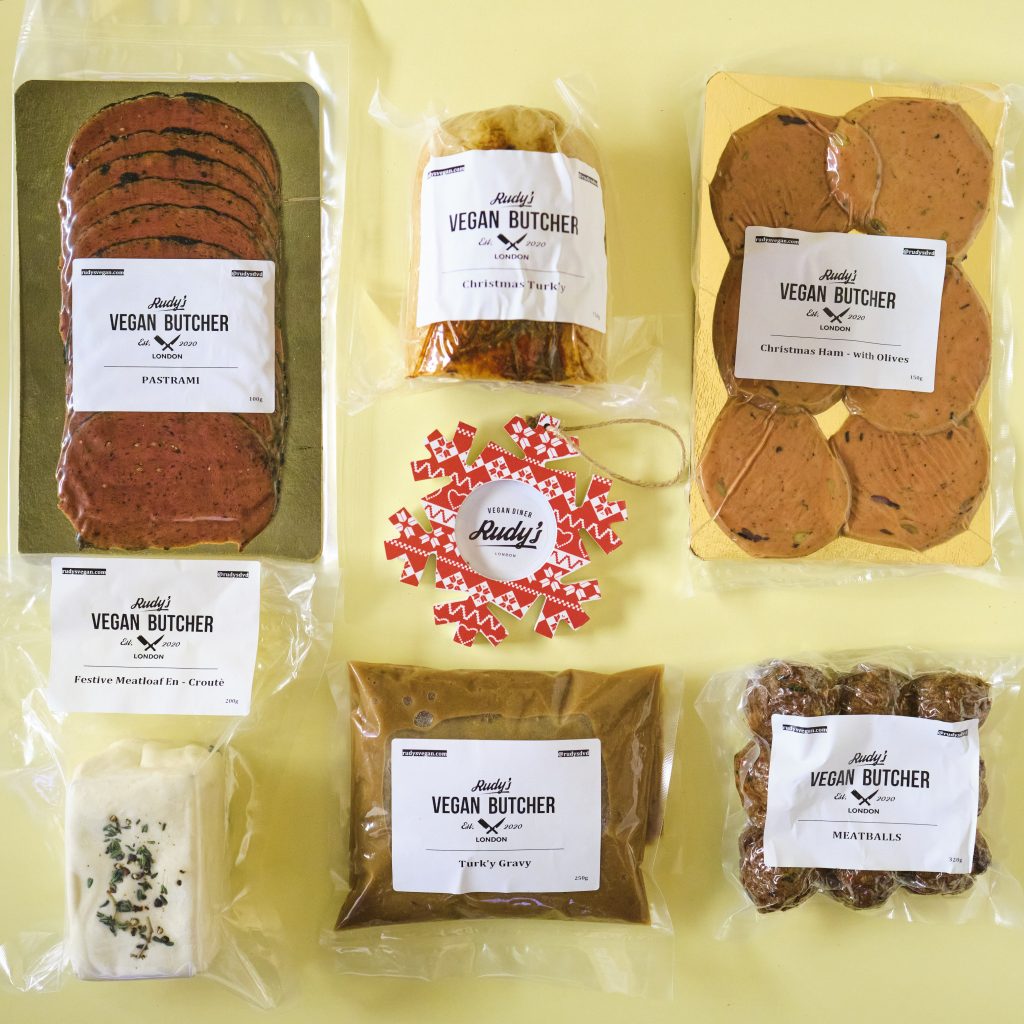 Vegans will be spoilt for choice with the Christmas boxes. Each hamper will contain Rudy’s pastrami, seasonally spiced Christmas ham, meat-free meatballs, and the  festive meatloaf en croute.

The feast boxes even contain an alternative to turkey – a spectacular plant-based Christmas Turk’y roll, with cranberries and hazelnuts.

The showstopper is made from seitan Turk’y packed with soysage stuffing (vegan soya sausage), accompanied by a generous serving of Turk’y gravy with fresh rosemary, thyme and garlic.

And Rudy’s hasn’t stopped there. Each feast comes with all the traditional trimmings for the ultimate Christmas dinner including King Edward potatoes, parsnips, carrots, Brussel sprouts with baycon bits, all perfectly seasoned and ready to roast.

Rudy’s have even added snacks for customers to munch on whilst they are cooking – each box is also packed with popped water lily seeds.

The seed snacks come in three delicious flavours – dark chocolate and raspberry, paprika and Provençal herbs, or the Cheezy vegan.

For £55, Rudy’s Festive Feast Boxes can feed up to four people.

The sell-out boxes prove the growing market for vegan goods and services, and reflect on the ever-growing number of vegan meal and food delivery across the UK.

Rudy’s will be releasing limited stock of their Festive Feast Boxes every Sunday, available for delivery Wednesday – Friday across the UK.