May 1, 2019 / VeganTrade / No Comments
2
SHARES
ShareTweetGooglePinterestLinkedin

The innovative website FlyVe (standing for Fly Vegan) is a collaboration between the Vegan Society and the Humane Society International, created to encourage airlines to offer more in-flight meals that are suitable for vegans and flexitarians.

The website allows users to rate their inflight vegan catering experiences, which in turn will help others choose which ailines to fly with, depending on the vegan options they offer.

The campaign wants to see vegan meals offered as a default option on-board flights with improved meal quality not just in terms of flavour, but also nutritional content. 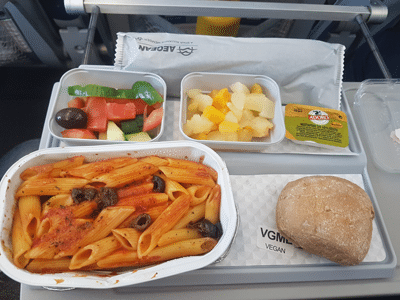 With veganism growing exponentially, airlines need to catch up with the growth and learn to cater for plant-based travellers, who at the moment are offered mostly meat, egg and dairy dominated meals when on board.

“Adding vegan options to every standard in-flight menu would mean that all passengers can opt for a more environmentally-friendly meal.

“It would be fantastic to see airlines really embrace the variety and creativity that is possible with vegan food, and to create options which are suitable for vegans but appeal to everyone.
“We have launched FlyVe to allow us to see which airlines are flying ahead of the curve, and which could do with some extra support when it comes to embracing plant-based options. We encourage any airline to get in touch for advice and training.”

Scientists from Oxford University have recently confirmed that eating a vegan diet is the single most effective way we can, as individuals, help with climate change. Animal agriculture has proven to be the biggest contributor to global warming than all forms of transportation combined, including air travel. However, offering an in-flight vegan option could be a great way to try and balance out these pollutants and could even be seen as a way to encourage non-vegans to make better choices when it comes to food options.

Find out which airlines are rated highest for their vegan food options by clicking here.