Vegan Tuna Fish Replacement Now On Sale in the UK

May 22, 2019 / VeganTrade / No Comments
0
SHARES
ShareTweetGooglePinterestLinkedin

Made by global brand Lumo Linda and brought to the UK by health foods supplier All About Healthy Foods, TUNO is made using only natural, plant-based ingredients. The product uses soya to mimic the flaky texture of seafood whilst, being low in calories, gluten-free and rich in protein.

Now, in a bid to combat overfishing and depletion of fish in our oceans, TUNO has collaborated with seafood industry experts to create this ocean-safe fish substitute.

The day has finally arrived! We’re proud to announce that @morrisons is the first major U.K. retailer to stock our gluten-free, 100% plant-based seafood alternative, TUNO, nationwide! You'll find Spring Water, TUNO Mayo, Lemon Pepper, Thai Sweet Chili and Sesame Ginger in the canned fish aisle. Enjoy sandwiches, pasta and salads with an ocean-safe and earth friendly alternative. Give TUNO a try and let us know what you think! Click the link in our bio for the official announcement. #LomaLindaUK #TUNO #Morrisons #plantbased

Managing director at Worldwide Food Associates, Eric Woods commented: “Health and sustainability are critical components in a world where today’s shoppers are not only aware of the benefits of plant-based proteins, but also embracing them as part of a healthy lifestyle.

“As such, retailers like Morrisons are significantly increasing the space allocated to plant-based alternatives, as more brands and SKUs enter the market.

“TUNO has already received positive reviews from consumers stateside and in Australia and we are looking forward to bringing this new product to UK consumers, providing a tasty, nutritious and sustainable alternative to tuna.” 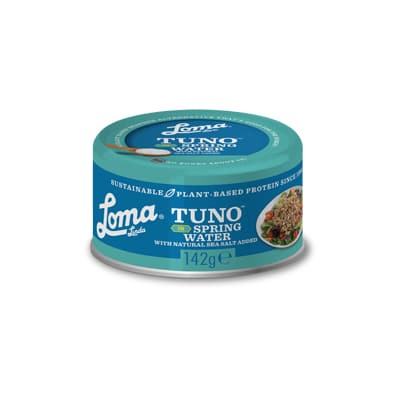 Tinned varieties are available in three flavours: Spring Water, TUNO Mayo, Lemon Pepper and Sweet Chilli whereas on-the-go pouches come in Sesame Ginger flavour. They are currently stocked in Morrisons at the RRP of £1.30.