Plant-Based Seafood Producers To Launch in the UK

The Dutch company Vegan Finest Foods has announced plans to launch their Vegan ZeaStar in the UK. The brand is a collaboration between Vegan XL and the Vegan Junk Food Bar.

The 100 per cent plant-based sashimi became such an internet hit, shortly after it’s release, that it couldn’t possibly keep up with demand. Today, the revolutionary sashimi got an upgrade with the addition of plant-based omega-3 oils.

Now, just one year after its launch in the Netherlands, the brand is set to go international. 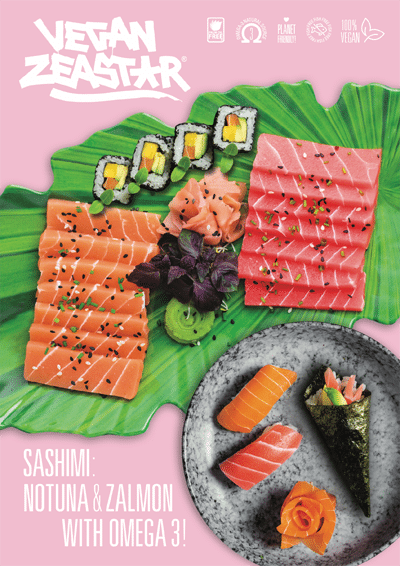 The creators have been working on making vegan seafood for many years, striving to achieve the same flavour, quality and texture of fresh sea fish. It has resulted in two revolutionary products, the No Tuna and Zalmon, both made from tapioca starch and seaweed glucose. The quality of this product meant that it immediately became a breakthrough in the plant-based market.

Sashimi is a traditional Japanese dish made of thinly sliced raw fish. However, due to the bad ecological reputation of tuna and salmon (both species are overfished), this food choice is quickly becoming controversial. A fish-free alternative opens up a new and positive outlook for dishes such as sushi, sashimi and nigiri.

In the Netherlands, Vegan ZeaStar sashimi is on the menu of the popular chain Vegan Junk Food Bars, in Amsterdam and Rotterdam. In the near future, the products will be available in supermarkets, UK shops and restaurants, launched by the distributor of Asian foods, JFC.