Plant-based food is set to dominate the economy

Veganism might once have been viewed as a fringe movement, adopted only by ‘hippies’ and the super health-conscious, but new data shows plant-based foods have exploded into the mainstream, dominating consumers and the marketplace at national and global levels.

The vegan population is growing exponentially – according to Business Wire, in the last 10 years, the number of people who identify as vegan has multiplied by more than seven times, particularly among the under 35’5.

As it stands, one in eight Brits now identify as vegan or vegetarian – that’s almost 13 per cent of the UK population.

A further 21 per cent of Britons identify as flexitarian, this means that at least ⅓ of the population are now eating a meat-reduced diet and adopting certain vegan purchasing behaviours. 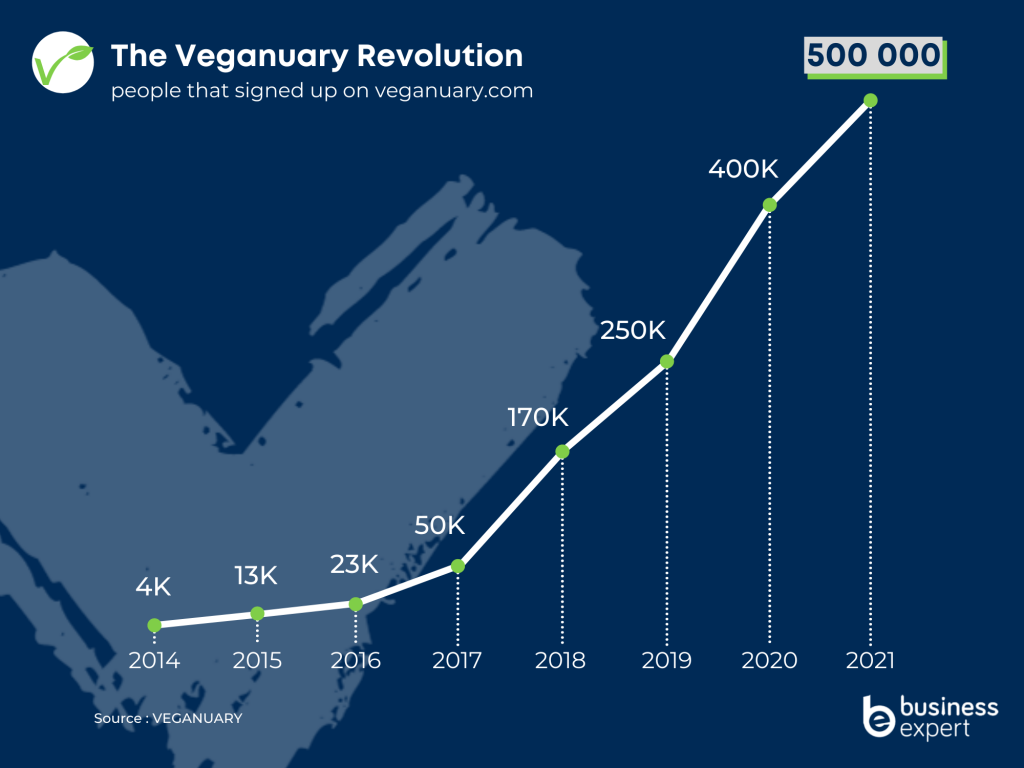 The month-long plant-based challenge, Veganuary, has been responsible for bringing great attention to the vegan movement worldwide.

Many pledge-takers stay vegan or reduce their meat consumption long after the challenge has ended, and join the ranks of plant-based consumers who are fuelling the industry and consistently increasing its worth. 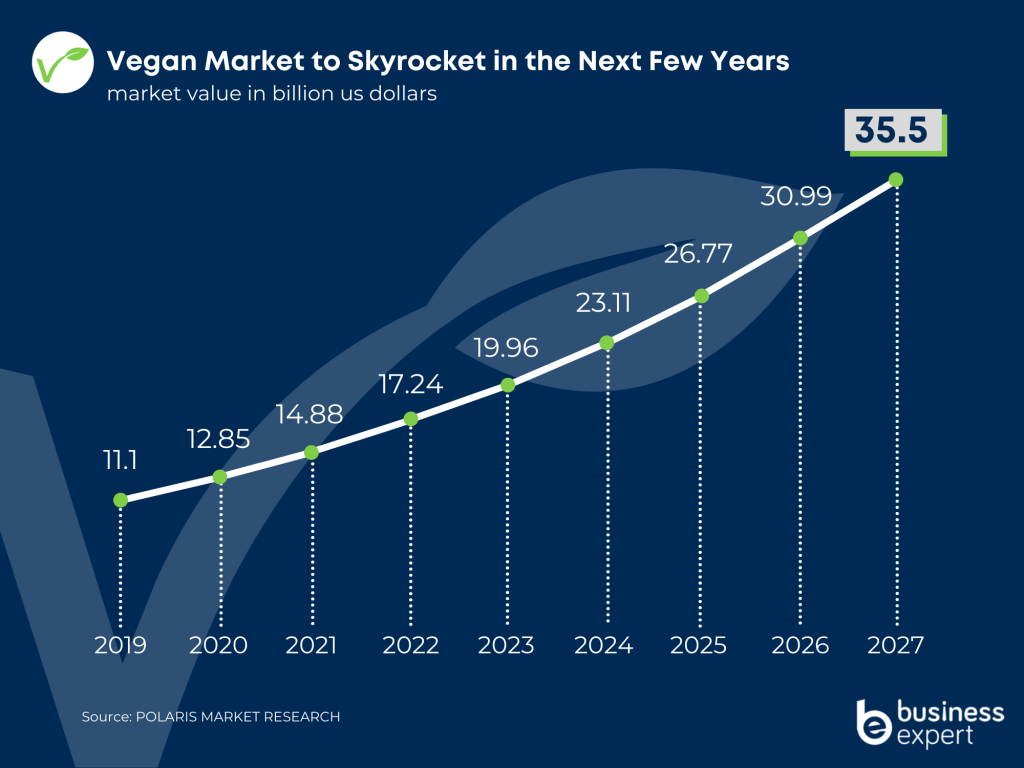 How will meat and diary industries be affected?

According to new data by Polaris Market Research, the global vegan food market is now predicted to reach a whopping $35.5 billion by 2027.

If we look at the global meat market (a $1.8 trillion industry), which declined by 3 per cent during 2020, it’s clear that the plant-based economy is going to fill the gap – and more. 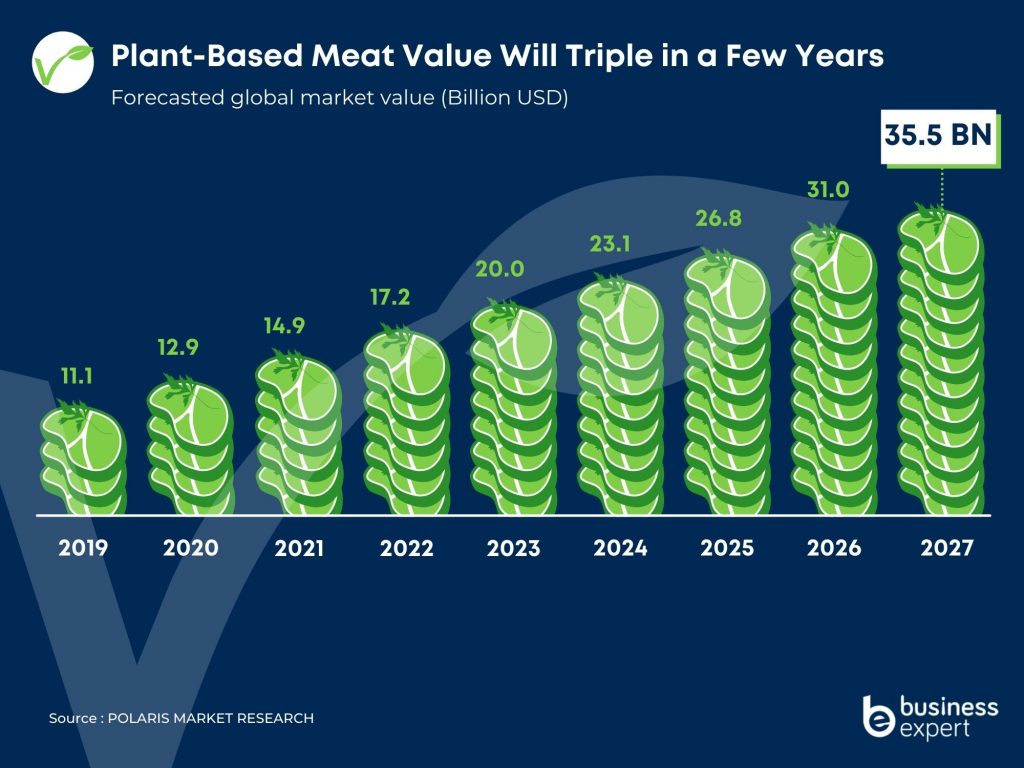 Likewise, vegan meat-alternatives are estimated to skyrocket, with their market worth tripling in just six years –  growing from a current worth of almost $35 billion USD globally, to over $35 billion.

Business Expert estimate that the vegan milk industry will grow from $13 billion USD to $35 in the next five years – so it’s not too prudent to say that not only has plant-based food and drink become mainstream, but it could replace ‘traditional’ meat and dairy diets in the next century. 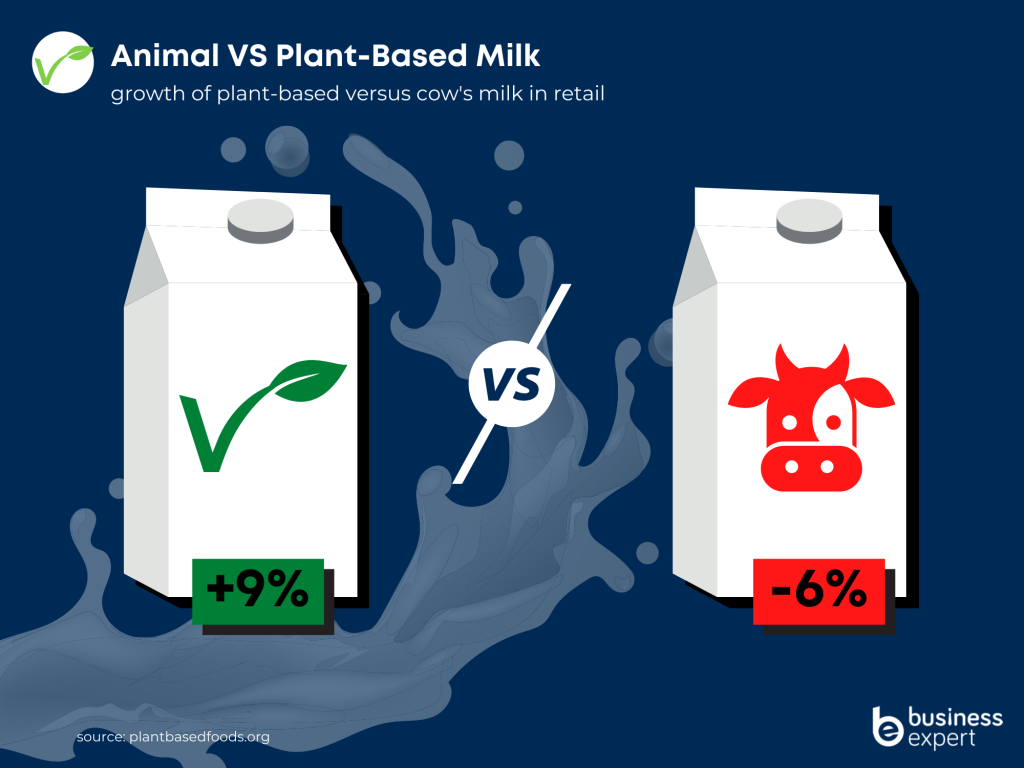 In fact, a recent report by global consultants AT Kearney takes this even further, stating that by the year 2040, up to 60 per cent of meat will no longer directly come from animals, but will be produced from either cultured meat or plant-based alternatives.

If that’s the case, then the meat industry is set to be superseded by the vegan industry in 20 years or so – the $2 trillion-a-year industry is on a countdown to becoming replaced by more profitable, sustainable and ethical plant-based industries.

When that happens, it won’t just be the food industry that is impacted – food shapes our job markets; our religious and cultural identities, as well as our daily lives. Thus, it’s safe to say that the transition to and dominance of plant-based food will affect everywhere on the planet and ever person on it.