Nestlé Announce The Creation Of A Vegan KitKat

Confectionary giant, Nestlé, have this week released the news that they will be making a vegan version of their world popular KitKat chocolate bar.

The brand have said that the vegan KitKat, to be named KitKat V, will deliver the same ‘balance between crispy wafer and smooth chocolate that people know and love’ – just without dairy! 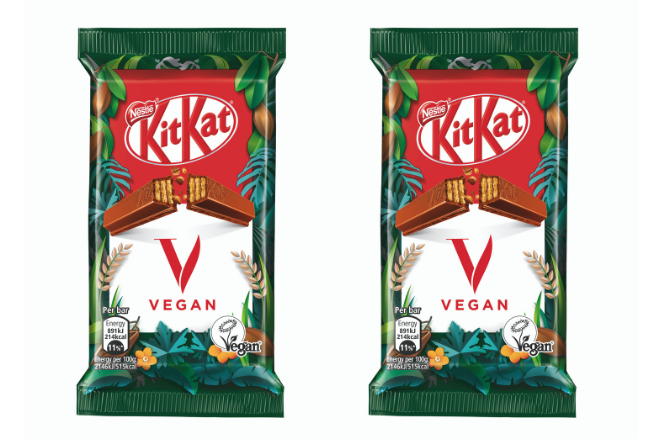 Alexander von Maillot, head of confectionery at Nestlé, said: “One of the most common requests we see on social media is for a vegan KitKat, so we’re delighted to be able to make that wish come true.”

“I can’t wait for people to be able to try this amazingly tasty new KitKat. This is a product for everyone who wants a little more plant-based in their life!”

The exciting KitKat V will be launched later in the year in several countries around the globe, available through KitKat Chocolatory and selected retailers. If popular, Nestlé will launch a wider roll-out.

The new vegan bar was created by Nestlé’s chocolate experts in the company’s confectionery research and development centre in York, UK, the original home of KitKat.

Recipe developers worked tirelessly to ensure that a vegan version would live up to the non-vegan version that consumers already lover.

Louise Barrett, head of the Nestlé Confectionery Product Technology Center in York commented: “Taste was a key factor when developing the plant-based chocolate for our new vegan KitKat.”

“We used our expertise in ingredients, together with a test and learn approach, to create a delicious vegan alternative to our original chocolate KitKat.”

As part of the company’s new sustainability and climate objectives, Nestlé want to helping people embrace a more plant-based diet, with options across its wide range of food and beverages.

Moreover, surveys have shown that consumers are interested in exploring more vegan foods across different categories, in aid of both ethics and environment.

Alexander von Maillot added: “There is a quiet food revolution underway that is changing how people eat. We want to be at the forefront of that, championing the discovery of plant-based food and beverages.”

“What better way to do that than offering a vegan version of one of our most famous and much-loved brands? The new KitKat V means chocolate lovers now have a great plant-based option when they have a break.”

The exact launch date has not yet been declared but as soon as it has been announced, Vegan Trade Journal will share it with our readers.

Nestlé’s announcement follows after numerous confectionary giants the world round have released vegan versions of their popular chocolate treats, including Mars Incorporated’s Galaxy, who introduced vegan flavours in 2019.