From Monday 30th September, the East London butchers-cum-restaurant Hill & Szrok will be participating in a meat-free Monday takeover.

The event is ahead of World Vegetarian Day on 1st October, with meat alternative brand  The Vegetarian Butcher providing the stock, offering customers a range of plant-based meat-free options. The Vegetarian Butcher van will then take to the streets of Britain, touring the UK,  convincing meat lovers to embrace flexitarianism by enjoying meat without the animal. 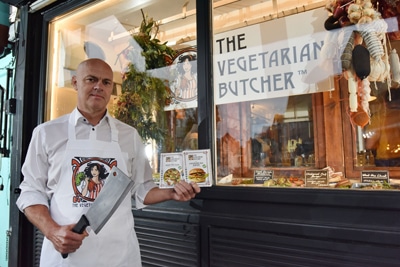 London, Bristol, Birmingham and Manchester will be able to try meat-free versions of their favourite street food dishes from The Vegetarian Butcher food truck with options such as Big Bangers (Cumberland-style sausages), What the Cluck (chicken-style chunks) and Magic Mince (beef-style mince) on the menu.

Founder of The Vegetarian Butcher, Jaap Korteweg is a ninth-generation farmer who became a vegetarian after realising he couldn’t face taking animals to the slaughterhouse – but he realised almost immediately that he still craved the satisfying taste and texture of meat. After working with top chefs, he developed innovative substitutes that captured the exact experience of the food he missed.

Jaap commented: “Many people think they should eat less meat for a variety of reasons, but they feel like they simply can’t live without it. They love the taste, juiciness and texture and feel that it’s the highlight of their meal. That’s why we’re taking over an iconic London butcher – because our products are so unmistakably meaty, customers don’t have to miss out on anything if they take animal meat out of their diet.

“By launching our new range in supermarkets across the country we’re showing the nation that there’s no need to compromise on great taste when you go flexitarian. Even food critics and Michelin-star chefs couldn’t tell our plant-based chicken chunks from actual chicken!”