May 10, 2019 / VeganTrade / No Comments
0
SHARES
ShareTweetGooglePinterestLinkedin

Vivera is launching a fat-free vegan bacon into Sainsbury’s stores.

The vegetarian and vegan Dutch company that has produced popular plant-based meat substitutes since 1990. They are one of the largest producers of plant-based meat alternatives in Europe, the company is already well established in the UK, with products such as vegan burgers, shwarma kebab ‘meat’, fish-style goujons and ‘chicken’ pieces being firm favourites within the vegan community. 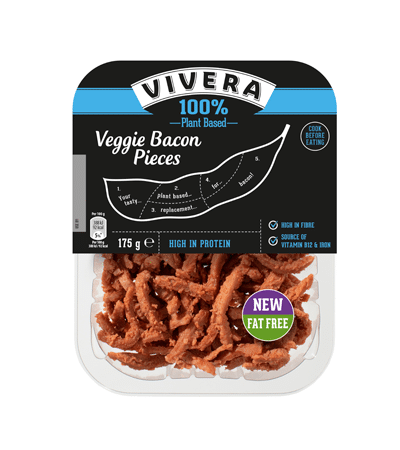 However, now the company are releasing a fat-free product that mimics bacon. The pieces are said to replicate the taste, texture and appearance of bacon, whilst being environmentally, nutritionally and ethically superior to the notoriously unhealthy animal product.

Commercial director of Vivera, Gert Jan Gombert has commented: “Especially in the British market we foresee a large demand for our fat free vegan bacon. Traditionally it is one of the product categories where meat has been difficult to replace. Our product development team has done an outstanding job in making the bacon pieces as tasty as the available regular bacon while reducing the fat level to zero! The overwhelming positive feedback from British consumers for our vegan steak, after its introduction last year, made us decide to give again priority to the British market and have the first launch to market here.”

Back in 2018, Vivera presented UK consumers with the first-ever plant-based steak, selling over 1,000,000 of the vegan steaks in Britain alone. Tesco’s were the first distributors of this product however, in line with the launch of the bacon pieces on the 15th May, 430 of Sainsbury’s stores will also be stocking the popular plant-based steaks.