CRACKD, the makers of the UK’S first liquid vegan egg replacement, is targeting 60 per cent awareness in the vegan community with biggest national marketing campaign to date

CRACKD The No-Egg Egg only launched less than a year ago, but it has already set the vegan community alight. Now, the brand continues to over-invest in order to drive further awareness.

To support increases in distribution only eight months after launch, CRACKD The No-Egg Egg ran its first national TV campaign in July reaching 45 per cent of awareness across the long-term vegans*. 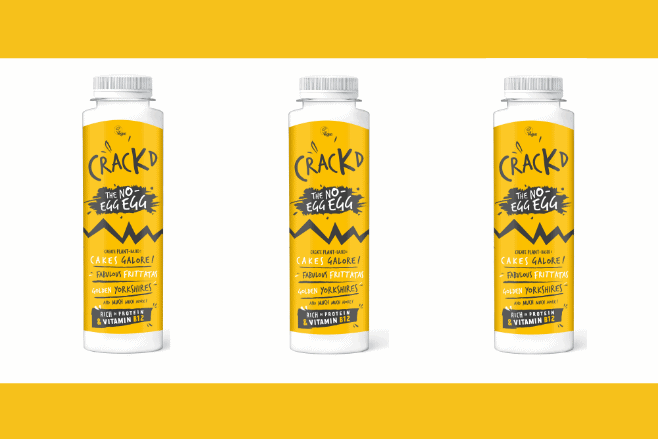 CRACKD have reported that they are now ready to scale up with their biggest national multi-channel marketing campaign yet, running on TV, OOH, digital, social media and press, aiming to raise its awareness in the vegan community to more than 60 per cent.

What is CRACKD The No-Egg Egg?

CRACKD The No-Egg Egg is a 100 per cent plant-based egg replacement made from pea protein, cold-pressed to retain both flavour and nutrients. It is also rich in vitamin B12 whilst containing no allergens or fat.

The egg replacement can be used in a wide range of applications for home use and within the food service. Whether it’s indulgent bakes or show-stopping savouries that consumers are after, CRACKD has been created especially for those who don’t want to compromise on taste, versatility and ease of use.

This innovative liquid egg replacement is already available in Morrisons, M&S, The VeganKind, WholeFoods, Amazon and Selfridges (RRP £3.99), to name a few, and the brand will expand internationally in autumn.