A Classic Soup Gets a Vegan Make-Over

The Classic Pea and Ham Soup Gets a Vegan Make-Over

Suma is a wholefood collective founded in 1977 and one of the largest co-operatives of their kind in Europe. They deliver over 7000 vegetarian and vegan, natural, responsibly sourced products to businesses and communities across the UK and internationally.

Last year, Suma launched the first vegan version of tinned sausage and beans, burgers and beans and meatballs. Now, they have launched their plant-based take on a classic soup bringing us a completely unique product – a tinned pea and vegan ham soup, with the ‘ham’ part of the soup made of soya protein.

Andi Butterworth, who developed the range, commented “As vegan living becomes mainstream, more people are looking for simple cruelty-free meals. What we’re trying to do with our convenience range is help make it easier for people to be vegan, or simply cut down on meat. Sometimes you want to cook and create. Sometimes you just need something tasty and fast, and that’s what we’re offering to the growing number of people who want to enjoy classic favourites but without the meat.” 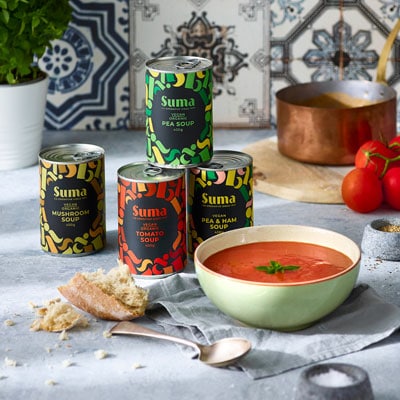 As the alternative meat market continues to see huge growth, food producers are experimenting with all sorts of plant-based alternatives, from sausages, burgers and chicken, to fish fingers and haggis. As veganism continues to grow, traditional and conventional retailers are responding by increasing and developing their plant-based offerings.

The vegan pea and ham soup is being launched alongside three other organic plant-based soups including a brand new creamy mushroom soup, as well as improved recipes of their organic tomato soup and premium pea soup.